Dr. Marija Balkovic, M.D. gives utmost attention to hair loss prevention and longevity of your hair as well as to improving and maintaining high quality of your hair.  Wide level of service directed towards his goal includes:  Plasma Rich Platelet Therapy (PRP), cocktail mesotherapy specially made for your own needs, and medication therapy.

Medication can be very effective in early stages of hair loss, as well as after hair transplant.  American Food and Drug Administration (FDA) approved two medications for treating Androgenetic Alopecia in men.

Only local use of Minoxidil 2% is recommended for women. 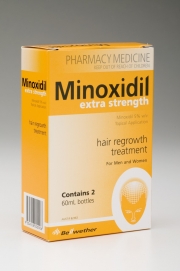 Minoxidil was first used to treat high blood pressure.  However, patients noticed a side effect of excessive hair growth. This led to use of Minoxidil as a lotion for localized hair loss.
It comes in a 2% and 5% concentration.  In other countries 12% and 15% concentration can be obtained by prescription only.   5% concentration is considered 45% more effective than 2% concentration.

Exact mechanism of action is not 100% clear, but it most likely increases circulation, promoting nourishment of the follicles and with it hair growth.  Results are seen after six months to a year and patience is essential.  Around one third of patients are very satisfied with results, and one third reports that hair loss stayed the same.

It must be used regularly, as stopping use will results in loss of improvement.

Side effects are rare, but irritation of scalp is possible, most commonly caused by propylene glycol.   In U.S. it is available in a form of foam as well, Rogaine 5%, which doesn’t contain propylene glycol, hence irritation of skin is reduced and this form is more popular among patients.  In women, occasionally facial hair growth might appear.  Very, very rarely headaches and dizziness might occur.  Not recommend during pregnancy and nursing.

Male Pattern Baldness or Androgenetic Alopecia is caused by DHT hormone action on the genetically predisposed hair follicles.  DHT is formed under the influence of 5 Alpha Reductase.

Finasteride (brand name Propecia) blocks enzyme 5 Alpha Reductase type II and reduced levels of DHT for almost 70%.  Level of testosterone is therefore increases but within the normal values Decreasing the amount of DHT causes increased hair growth and slows down hair loss.  Hair growth on other parts of the body is not increased by Finasteride.

In 1974 there was a medical study done in Dominican Republic where a group of male children had hereditary deficiency of Enzyme 5 Alpha Reductase.  They had low levels of DHT and this contributed to underdeveloped prostate.  They also experienced no hair loss and had no acne.  Researchers set out to identify Enzyme 5 Alpha Reductase inhibitor in order to find cure for enlarged prostate and for hair loss.

As a result of lengthy research in 1992, Finasteride 5mg medication was first produced, under the brand name Propecia.  It is approved medication for enlarged prostate treatment in men over fifty.  FDA approved Finasteride in dose of 1mg/day for treatment of Male Pattern Baldness.

Studies show that almost 90% of men taking Finasteride retain their existing hair, and report improved hair growth.  Five year studies reported that 48% of participants experienced improvement in hair quality and growth, 42% reported no further hair loss, and only 10% reported continued hair loss with therapy.  This was a significant result in favour of Finasteride compared to a placebo group in which 75% of participants reported continued hair loss.

Dosage is 1mg once per day, for at least a year in order to see results. There can be perceived worsening during the first few months as hair is changing and is replaced by new healthier hair.

Side effects are rare and short lasting.  3.8% of men report some sort of sexual dysfunction, while placebo group reported 2.1% of such side effects.   Side effects are usually noticed at the beginning of therapy and are fully reversible after discontinuation.  Finasteride is not approved for use in women, while pregnant women should not even dispense it.  Discontinuation of Finasteride will cause loss of achieved results and eventually patients might experience further hair loss. 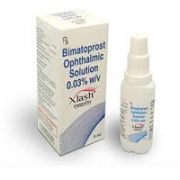 Bimatoprost is used to treat glaucoma. One of side effects is increased growth of eye lashes during prolonged use of this medication.

In 2008 FDA approved this medication for use in cosmetics under the brand name Latisse in 0.03% concentration.

It should be applied once a day along the line of upper eye lid and it is effective in 75% of users.  It lenghtens eye lashes, as well as add thicknes and darker colour.   It tkaes around four months for full results to be visible.

Side effects are rare, but around 4%of users reports eye irritation, redness and different pigmentation of the skin.

It is believed that Bimatoprost would be effective in increaseing eye brow growth as well, but not at the same level as in eye lashes. 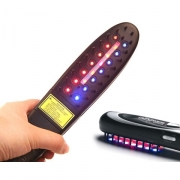 Laser therapy is highly recommended, esspecially in women with diffuse hair loss, who are not ideal candidates for hair tranplant procedure. Three treatements per week are usually recomended.

Laser comb can be used with other treatments such a minoxidil and finasteride medication. It can also be used before and after hair transplant procedure.

Experience, knowledge and professionalism for Your great Looks and Health!
Yours MBC

Medical Beauty Center offers monthly promotions and discounts. Check with us every month!